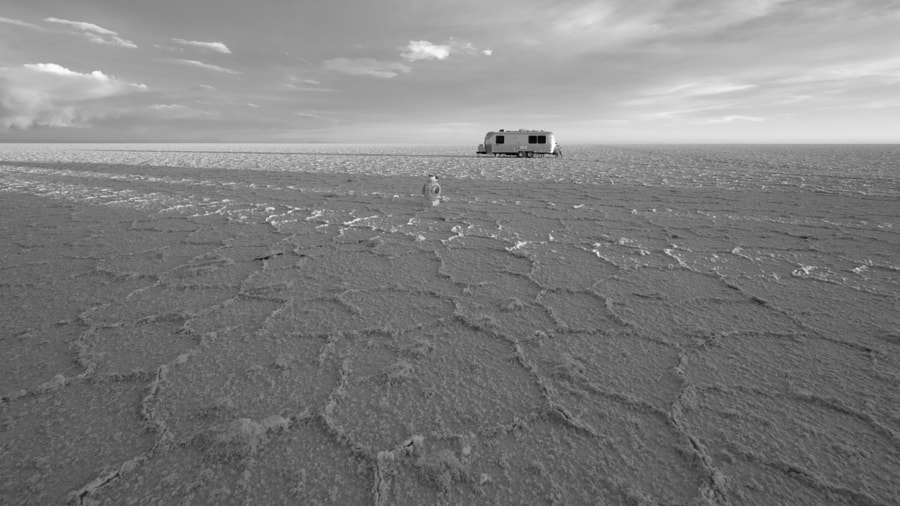 When I wrote this, I was sitting in Airstream Trailer on the Salar de Uyuni in Bolivia.  The vast expanse of the salt flats really drives home the fact that we humans are but tiny specks on the face of this earth.  Our journey to the trailer took the better part of the day as we left from San Pedro de Atacama (Chile) climbing up to through the Andes to the border with Bolivia.

Along the way, we stopped at the Emerald Lagoon, a geyser field, and the Red Lagoon.  As we drove up to the latter, Eric, our guide, told us that it had shrunk significantly since his last visit just 3 weeks ago. Bolivia has been in the grip of a severe drought for the past several years and the lagoon is surely the worse for that. It is an important nesting site for 3 types of volcano flamingos (James, Andean, and Chilean) that call the Andes home and to seeing the lagoon this way drives home the impact of climate on natural habitats. 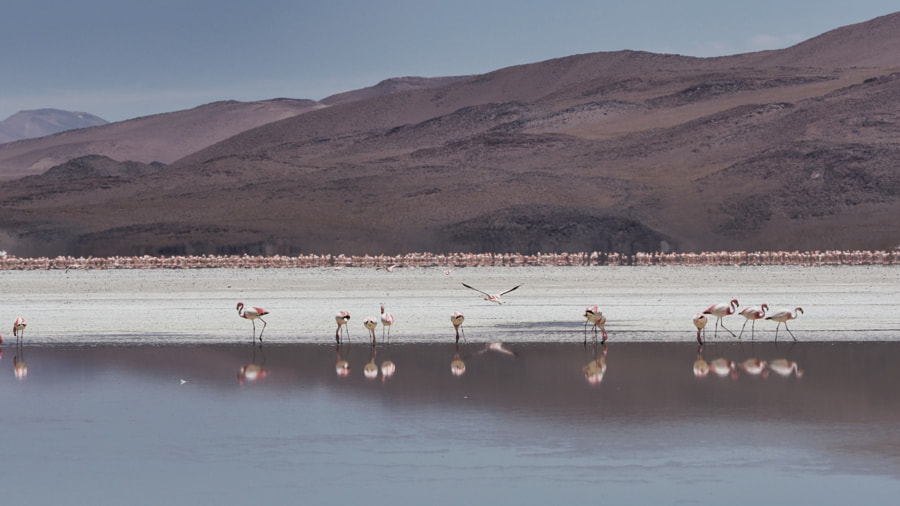 As for the salar, it is a vast expanse of white nothingness that is ringed by volcanoes and mountains.  Because there is nothing for your eye to grab on to, it is supposedly easy to play with perspective – somehow making small toys look huge and humans look small once you master a tricky bit of photography.  For the record, I did not master it.

During the rainy season, the salt flats flood, creating a mirror that reflects the sky and everything in between.  As I was planning this trip, I was torn --- if the salt flats were flooded, our airstream would be parked up in the mountains and if it was dry, we’d be alone under an endless sky.  Both scenarios were equally appealing.  As an avid photographer, I longed for the mirror.  As a seeker of solitude, the airstream parked in the middle of nowhere was calling my name.  On this trip, the solitude won.

Our days were spent roaming – climbing to the top of a cactus island seemingly floating atop the white sand like an alien ship.  We went to see the mummies high up on the side of the volcano and visited a cave with strange formations that had been discovered by local children and turned into a small tourist attraction by their enterprising parents.  We hiked a mountain pass and ambled along the edge of the salt amongst a herd of llamas.  All the while we were fueled by the excellent food of Issak the camp chef. Our sleep was marked by strange and wild dreams.  Perhaps caused by the altitude or perhaps by the medicine we were taking to combat the altitude.  Three days stretched endlessly yet passed by in a flash until suddenly it was time to go. One wonders what early humans living on the side of the volcano thought when they happened upon the salt flats.  Did they see it as an inhospitable expanse of land to be traversed much as  North American families traversed the Great Plains in covered wagons searching for a better life for themselves and their families?  Or was the mirror a portal into another world, a parallel universe so to speak?  A place where one could reach out and touch another, maybe better, version of oneself?

And what of that family mummified in a cave on the side of a great volcano?  The legend is that they died during the great, cold dark that followed a large volcanic eruption and were buried there together by other members of their village.  Yet, their facial expressions looked much the same as those that I had seen in Herculaneum --- legs contracted to their torsos and mouths open in a primal scream as if gasping for air amidst the ashes and fumes. We leave with a promise to ourselves to investigate the legend further.  Like most such promises, I suspect it will go unfulfilled when we plummet back into our daily lives.